You are invited to enjoy this brief introduction to Bob's new book, Mary Didn't Know. Send comments or questions  HERE

The hardcover book ($12.50) will be available for shipping in early December, 2022. To order a copy of the first printing, see bottom of this page. 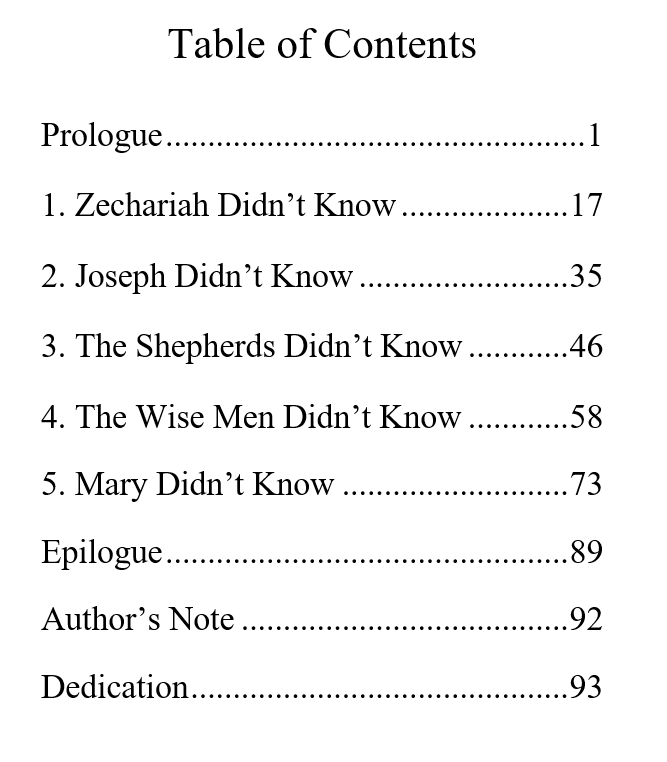 The stone-paved streets of the Upper City.

Luke let out a nearly silent chuckle and a broad smile swept across his face as he realized that he was walking at a pace that had left him nearly breathless.  Anyone walking with him (or trying to keep up) as he navigated the streets of Jerusalem would have asked about the urgency of his journey. But no one inquired. Luke was making this journey alone.

Alone. That was unusual. Times of solitude had been fleeting over the past decade. Had it really been ten years? How the time had flown by. When Paul had arrived in Troas, he was building a team that would accompany him on his mission to take the Message to unreached people. With him was Silas, a gifted and mature partner. By contrast, Timothy was so young – Paul called him his “true child in the faith.”

Luke was humbled and thrilled when Paul had invited him to join them on their journey. He had assumed he’d serve as Paul’s physician, treating what his patient called a “thorn in the flesh.” The events in Philippi, however, made it clear that, in addition to the chronic ailment, he’d have plenty to do treating the trauma of beatings and abuse Paul endured.

But Paul had seen more than a physician in Luke. He’d asked him to stay in Philippi and minister to the newly birthed churches that met in the homes of Lydia and the just converted Roman jailer.

Those years in Philippi had been filled with constant threat and endless joy. His mind swirled with names and faces. Luke realized that some of the people he cherished most in life were part of that church family. People like Epaphroditus, one of the first believers in the city, who had matured to become one of the godliest leaders Luke had known. His mix of compassion and courage had influenced dozens of Philippians to become Christ followers, including one of the magistrates, Dionysius Nicomachus.

The transformation of Dionysius’ life was so dramatic that the other leaders of the city had taken to calling him “Theophilus,” (God’s friend). When he’d told the other believers, Luke had wrapped an arm around his broad shoulders and said, “If the name fits, wear it!” and the church had called him “Theophilus” from that day forward.

Recalling Theophilus snapped Luke back to the task at hand. He quickly glanced around, orienting himself. It wasn’t too difficult. Jerusalem’s landmarks were easily seen from anywhere in the city. The Temple dominated the eastern heights, and Herod’s Palace the western. Walking from the oldest part – the City of David – he’d walked west. Climbing the steps to the upper city he’d passed the home where he and Paul had been welcomed by James and the rest of the elders a few days earlier.

At the corner Luke turned right, toward Herod’s Palace, now looming large in front of him and to the left.  It would just be a couple of blocks to the High Priest’s house, then two doors down to the home where John was staying. There he would find the person he was journeying to see – Mary, the mother of Jesus.

Despite his best efforts, Luke felt his pace quicken again, his heart pounding. Was it the walking or the anticipation that quickened his pulse? It was certainly the latter. The prospect of sitting down face to face with Mary propelled him eagerly forward.

It was, in fact, Theophilus of Philippi who had inspired this visit to Mary. Over a meal at Lydia’s home one evening, Theophilus had voiced his wish that an accurate, orderly, and scholarly life of Jesus was available. Some written accounts had begun to appear. A few seemed reliable, but they were written in a style that was more – well – Jewish.  Not that Jewish writings were bad. They were, however, composed in a way that assumed an understanding of Jewish life and culture than any Greeks simply didn’t have. Theophilus longed for something that he could study and share with his classically trained colleagues in the city administration.

In the depths of his spirit, Luke had felt a sudden sense of urgency…a compulsion to write just such an account. He’d shared this new-found yearning with Paul as they sailed from Miletus on their way to Jerusalem. Paul agreed. He recommended that Luke take time while they were in the city to interview the apostles. Peter, Andrew, John, and other disciples were still in the city, as were Jesus’ brother James, and his mother Mary.  After introducing him to the elders the day before, Paul had taken Luke personally to John. When he heard Luke’s desire, John had quickly invited him to his home, just north of the High Priest’s residence, to meet and talk with Mary.

He was walking past that complex now. Even here, in the shadow of the Herod’s Palace, the home of Israel’s High Priest was impressive. Luke remembered that it was to this complex that Jesus had first been brought after his arrest. It was in the central courtyard, just beyond the gate, where Peter had denied knowing Jesus. Luke continued two doors further to the home of Malchus, a former member of the High Priest’s staff.

After Jesus had replaced his severed right ear in the Garden of Gethsemane, Malchus had tracked down members of the Way, connecting first with John. It was not hard to convince him of Jesus’ divinity or His love, and he became one of the early followers of the Risen Christ. He had opened his large home to John and Mary and made it clear that they should consider it their own.

Now Luke stood outside the door. He paused, took a deep breath, blew it out slowly, and rapped on the door. A few moments later a servant girl led him into a comfortable room. A woman with gray-streaked hair, deep brown eyes, and a quick, broad smile rose from a cushioned window seat.  “You must be Luke,” she said. “I’m Mary. John told me you were coming. He said you want to record the story of Jesus. How can I help?”

Luke took the offered seat, took out a wax-covered wooden tablet, and said, “I’m really interested in your experience. For example, how this all came to be.”

Mary smiled, the lines in her face revealed a life that had shared many smiles and shed many tears. “Well,” she said, “the story actually begins with my cousin, Elizabeth…”

Luke placed the stylus on the table. His heart was racing again! He had no idea how long he had been listening to Mary and taking notes. He took a sip from a goblet. He glanced over his shorthand jottings left in the wax. Later, when he had time to himself, he would turn these quick prompts into fuller narratives.

The events Mary had shared were remarkable. Each one filled with drama, intrigue, and deep faith. Her face beamed with excitement and emotion as she recounted each experience. Luke had found himself spellbound as he listened.

He glanced over his notes again, his head shaking from side to side as he pondered what he had heard. He looked up at Mary and saw joy in her eyes.

“How…” he found that his throat was so tight that the words barely came. He cleared it with a slight cough and took another sip from the cup. “How did you handle all of this? Did the angel warn you what was coming? Did you get any instructions or directions?”

A brief laugh escaped Mary’s lips. She quickly put a hand to her mouth, and her head shook. “No. There were no further instructions or explanations. No warnings or guidance. At least not to me.”

Her eyes looked out the window for a moment. She was lost in thought. “What floods of memories must be coursing through her mind?” Luke thought, but he dared not disturb them.

Mary sighed and turned back to Luke. A tight-lipped smile of mixed emotions on her face. “We didn’t know what to expect. What we assumed would take place was mistaken. What we thought we knew turned out to be wrong. We didn’t know much of anything.”

She looked out the window again. “God’s thoughts were certainly not our thoughts, nor his ways our ways. His ways, however, always give us hope and a future.”

There was another long pause. Barely audible, she whispered,

This concludes the free preview. The 93-page hardcover book gives a fresh, faith-filled perspective to the familiar Christmas story.

The  hardcover book ($12.50) will be available for shipping in early December, 2022. To order a copy of the first printing, see bottom of this page.